Worshiping Alone: a milestone in the journey 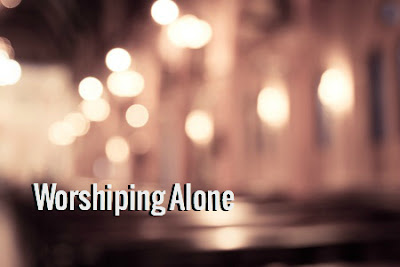 All of that work and reflecting, hoping and teaching, has culminated in this new moment in our worshiping life as a family.

The day has come that my son worships alone.

He is not really alone. He is surrounded by my new congregation. He is often sitting with friends. But he is not with me, because I sit in the front, or with my husband, because he has been traveling a lot over the past several months since we moved back to the U.S.

At 11 years old, my son has to get himself dressed on most Sunday mornings and get his butt in a pew without anyone hustling or hurrying him out the door. It is true that we live close to the church and that even though I walk out the door on Sunday mornings about three hours before he does, he still gets up early enough for me to “style” his hair. But once we are gone he is on his own.

I am usually seated in the chancel a few minutes before worship begins when I see him walking down that long center aisle looking for an empty seat or a friend. Bulletin in hand, he finds a place and gets ready for church.

I often loose sight of him once the service has started. It is a big sanctuary, and faces tend to blend in. But every so often I catch a glimpse of him in worship. Fascinatingly, he is not leaning on the adult sitting next to him. Neither is he laying down on the pew. He is not whispering too loudly “how much longer?” to whoever might be willing to listen. He is standing for the hymns, and singing them with joy. He is participating in the liturgy and, as far as I can tell, listening to the sermon.

A few weeks or so ago I wasn’t helping to lead worship, so we sat together in the sanctuary for the first time in months. He met me in my office and quickly grabbed “A Wrinkle in Time” off a bookshelf to take with him to worship. Bringing a book to read during the sermon was one of our compromises for the two years that we were a part of a church with no Sunday school.

But that book just sat next to him in the pew the whole service. There was no whining. There was no laying of heads on laps. There was minimal fidgeting from a child who for a period of his life could hardly talk without jumping up and down.

Yet when the time came for the prayers of intercession towards the end of the service, he did scoot over closer to me, wrapping his arm around my shoulder, as I had often done to him.

For a brief moment, I saw the teenager and young man he is becoming.

I am sure that all those moments together in the pew had a part in making this particular moment happen. But I also believe that being given the opportunity to rise to the occasion, to work this out on his own, and to show up as a part of the community of faith on his own also played a significant role.

I know his worship life, and our worship life together, will continue to morph and grow. I am sure there are many bumps yet to come along this road. But for now I am celebrating this particular stop along the way.

Posted by Rebecca Kirkpatrick at 11:56 AM