The Church We Mean to Be 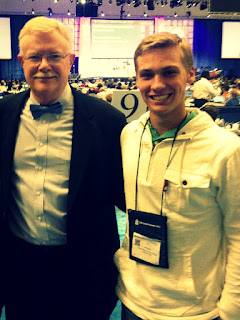 Part of who I am as a Christian, and who we are as a family, is connected theologically and historically to particular Christian denominations - in our case the Presbyterian Church (USA) and the Mennonite Church (USA). But the reality is that while being a part of these communities both locally and nationally might be important to us, as a nation we are moving more and more toward what is sometimes referred to as a post-denominational environment.

Families with young children do not typically join my PC(USA) congregation because it is a PC(USA) congregation. In fact, they will frequently "church shop," looking at a variety of churches born out of disparate Christian traditions with wide-ranging theological priorities and governance styles, which begs the question of whether or not teaching a child to identify and embrace a particular denomination/tradition is something of a former generation.

I spent this past week as a volunteer at the 220th General Assembly of the Presbyterian Church (USA), where a lot of questions were asked about children and youth and the potential future of our denomination. (The photo above is The Rev. Gradye Parsons, Stated Clerk of the PC (USA) with the Young Adult Advisory Delegate from the congregation I serve) These were not questions asked by groups tasked with studying how best to support and nurture young people in the church; they were asked by those frustrated with the level of conflict and a perceived unwillingness on the part of the "adults" to move the church into a more relevant future. In the face of this conflict and stagnation, the frequent lament is that we will drive the youth and the young from the church, and they will never come back.

One of the unique elements of a gathering like this is the inclusion of young adult advisory delegates who are continually polled on their opinions and wisdom as decisions are being made. In many ways the youth "advisement" is taken very seriously, and yet on some key issues (this year especially as related to the church's stance on same-sex marriage) the "adults" seem to have ignored the advice of the young people in their midst.

In addition, at times the entire assembly had a tone of basic disagreeableness, as adults, while rarely openly hostile, often acted with immaturity or self-interest. The young adult adviser from my congregation said to me (and I paraphrase) "I'm not worried about the young people leaving the church. I am worried about the adults ruining it before I get there."

In many ways the church is like a family, and we are called to ask ourselves how we collectively nurture and raise up young people within a church to be able to take over the family name and legacy when we are gone.

I believe that an Assembly like the one that just took place in Pittsburgh, rather than being an experience that keeps youth from sticking with our particular "family," is actually the kind of moment that helps them to claim their rightful place within the leadership of it.

In his book "The Parents We Mean to Be" child psychologist Richard Weissbourd writes of the modern dilemma of children not coming into their own because for as long as they have known, someone else has done everything for them. In a time of helicopter parenting, children have every single need met by parents who don't trust them enough to figure it out on their own. In this scenario children never need to learn from their parents or model their parents because they never see themselves needing to take on that role and responsibility.

Weissbourd writes that "children need to experience 'optimal frustration' - they have to experience us at times failing to meet their needs - so that they both have the opportunity and the motivation to learn how to function independently and to take on our admired traits."

In my mainline denomination, we do a wonderful job (in my humble opinion) teaching our values and responsibility to our children and youth, especially when parents help to make participation in church and a life of faith important. But it takes an experience of realizing that their parents/adults in their church are not perfect and cannot always meet their needs for young people to begin to envision themselves taking on leadership in their own lives and in the life of their church, either locally or on a larger scale .

I experienced this myself as a young person in the church, at a very similar Presbyterian General Assembly. I was an advisory delegate 16 years ago, at a gathering at which my denomination chose to add language to our constitution that officially banned gays and lesbians from serving in ordained ministry. This was a devastating moment for me as a 20 year old college student who had been taught the values of love and justice in my own local Presbyterian church. It was painful enough to have driven me away from the church forever. But because I had also been taught that I was capable of being a leader in the church, it instead helped me envision myself committing to a life of leadership in a church that so obviously needed my voice and my vision.

I believe that what occurred at the 220th General Assembly was indeed a moment of optimal frustration as well. A moment when youth and young adults were able to realize how to apply the values and skills that they have been taught in their congregations and to realize that the not-too-distant future church relies upon them being willing to apply those values and commitment to it.

I had two experiences this past week that have solidified my confidence in the future of my mainline church in this post-denominational world. First was in the work I did with the committee that acted to revise and amend the constitution of our church. To make a very long and complicated story short, our committee did what is often characterized as the boring and fussy work of the assembly: fixing technicalities, amending language, closing legal loopholes, etc. Yet in one piece of business we dealt with, we had the chance to earnestly discuss how we talk about inclusion and discrimination as a church. While those who had overtured our committee were asking to remove language that is seen to protect those against whom we all too often discriminate, the youth of our committee saw, in their power as full members of the committee, a chance to instead expand that list to include even more of those within the diversity of God's creation who are kept from full participation in the life of the church - specifically, sexual minorities.

The irony was by no means lost on me that it became one of my tasks to try to help these young people understand that their efforts would most likely fail. As painful as it was, when they told me that they had hoped THIS would be the day the church acted for full inclusion, I told them that I did not think this would be the day or that this would be the means for that to happen. As true children of this church, they decided that this 36 year old adult was not the final authority on the future of their church, and in classic style they convinced the rest of the committee to reconsider the overture. As true and faithful adults of my church, the committee allowed for over an hour to talk further about full inclusion in our denomination and the steps that we will need to take to get there in the future.

Lest I give the impression that the future of the church is only for progressive/liberal youth, let me add that while reflecting with a decidedly conservative teenager after the assembly, I asked him what he thought about the church and gay marriage. He was pleased to be able to surprise me by saying that he thinks that the Presbyterian Church should define marriage as not between a man and a woman but between two people. He doesn't necessarily support gay marriage, but reminded me that the most important thing to value as a church is grace and love; he is willing to be in a church with people who disagree with him because the most important thing we share in common (outside of our Presbyterian tenets) is the call to express the love of God.

In parenting and pastoring I have the same goal: to raise up children who will inherit and carry on my values but who will be capable of moving the world and the church to a place that I cannot. Being a part of a historical denomination and raising my child within one (even as it becomes less and less popular) means that we can trace this same cycle of generations over and over again in our relationships with one another, in the history of change and growth that we claim together, and in the confidence we have that our legacy is being carried into the future.
Posted by Rebecca Kirkpatrick at 11:12 AM