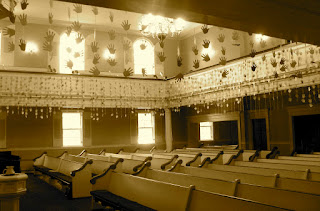 This past week I have shifted into a new phase of ministry, which has necessitated saying goodbye to the congregation that I have served with joy over the past ten years. I was sad to leave, but excited for new possibilities

I was especially good at holding my emotions together over the entire transition, and though I am notorious for “losing it” in worship at the first sign of sentimentality, I held it together through all of my lasts - until it came to the last moment I would be at the church with my now eight year old son.

This was the place where he was born, baptized and raised. While I have always been pretty clear that in my Presbyterian tradition and as a pastor that this was not my church home, it has become more and more clear over the past few weeks that this was HIS church home for sure.


It made me consider how we allow children to say goodbye to church - especially when it has been a place of joy and an extended family for his entire life. Here is what we did to say goodbye:

While I finished up a last few details in my office, my husband took our son around the majority of the building, saying goodbye to all of the classrooms and meeting rooms where he has spent countless hours - saying goodbye to murals and movie theaters, storytelling tents and puppet theaters, computer labs and nursery.

After that I took him to the sanctuary, and we sat together for a moment in the spot in the front pew where we have sat almost every Sunday for the past five years (when he started joining me in worship). He is known for not being willing to sit still for very long and realized that he had a captive audience in me.

Over the next fifteen minutes he “acted out” for me almost an entire worship service, and I was fascinated to watch him both mimic back to me things he has heard me say countless times as well as put his own spin on the theological meanings of our worship together.

He welcomed me to this time of worship and we sang the first few verses of his favorite Christmas carols, announcing the hymns as I remember them doing in my grandfather’s church when I was little, making sure that I turned to the correct page in the correct book and sang along.

He baptized an invisible baby after pouring invisible water into the baptismal font. He took care to ask the parents the name of their child - Bob, it turned out. Then he baptized Bob in the name of the Father and the Mother (which I don’t think he has ever seen/heard anyone do). Finally he walked through what I can only imagine was in his mind a packed sanctuary to show the baby off to the crowd. He even stopped at my pew, as is our tradition, to allow me to hold the baby myself - very briefly - to welcome the baby to the community.

He invited invisible children to sit with him on the steps for a Children’s Sermon, echoing the same message that I had given just a few days before about the gifts of the Magi and what each represented. Just as I do, he closed this time with prayer.

He joyfully jumped into the pulpit, after going back down to figure out how to turn on the overhead light that glows on one’s head. Interestingly, though it wasn’t clear what text he had chosen to interpret, it was clear that he understood the part of the sermon where the preacher attempts to convict the congregation to make a change and to live a better life, as he went on and on about the true meaning of Christmas and how we are supposed to observe it.

He celebrated Communion from behind the table using a liturgy that almost sounded like the one we use each month, breaking invisible bread and holding it up for his empty sanctuary to see, and pouring invisible wine into a pretend cup and speaking very eloquently about the blood of Christ in a way that made it seem much more lovely and much less bloody than it usually does to me.

When he was all done we sat together in the first pew again, and he made me tell him all of the things that I appreciated about his service - much like I am sure he has heard me do to my husband on occasion. We sat and snuggled for a while and talked about how much we we would miss being there and sitting in our spot together. We looked thoughtfully at the giant stained glass Jesus that adorns the back of the chancel, and giggled one last time about the electric lights that were installed on the back side of the building to make the window glow even in the evening.

I firmly believe, as the song goes, that the church is not a building and not a steeple; but having grown up myself in a church building that oozes sacred vibes, I recognize that there is something sacred in saying goodbye to the place where sacred growing has happened.

I am sure that someday we will return to that space, and he will make the typical comments of someone who has gotten older and taller, about how much bigger it all used to seem. But I know that this space will forever color his understanding and expectations of worship and community; that for a long time to come this will be his default setting when he thinks about what it means to go to church; that one day when he looks for a church on his own, and some day after that when he looks for a place to raise his own children, this will be what he seeks out.

I am grateful for how he has been shaped, and grateful for this very intentional goodbye.
Posted by Rebecca Kirkpatrick at 8:26 AM