In the summer of 2013, our family moved to Cairo, Egypt to serve as Mission Co-Workers for the Presbyterian Church (USA) living and working with the 150-year-old Presbyterian seminary there. Because of the sensitivity of our work and the moment in the life of Egypt, we didn’t share much online of our work and experiences while we were there.
Now we are living and working back in the United States and are still trying to process all that we experienced those two years: church life, politics, culture, and of course the hundreds of windows we walked through into another time.

Part of our calling to Egypt came in the form of our then eight-year-old son’s obsession with all things Egyptian. You can read more about that here. He was ready to spend lazy afternoons regularly wandering through the Egyptian Antiquities Museum off Tahrir Square. He assumed that trips to the Pyramids would be as regular as trips to the grocery store. He planned for Egyptian tchotchkes to fill his new Egyptian bedroom.

Of course, none of those things exactly happened. He did collect many different trinkets throughout our stay, which now decorate his new bedroom in Pennsylvania. He did get to the point where taking a book on a visit to the Pyramids was a good idea since big stones are really only impressive the first time you see them. He did spend enough time in the Egyptian museum that we no longer needed a guide to appreciate what we were seeing. But life in modern Egypt often gets in the way of immersing oneself in the ancient.

There were moments, though, that were nothing short of magical. Moments when I felt the impulse to pinch myself - or maybe him - just to make sure we all knew it was real.

Now that we are living thousands miles and thousands of years away from all of the spectacular things we saw and did over the course of two years, I am finally able to wrap my head around what made it so magical.

First there is something to be said for the scale of the ancient world - both the immensity and the minuteness. We walked through temples towering with columns covered in hieroglyphs…row after row - spaces built not just for worship but to hold a god in all its glory. We stood next to monuments so large that it is hard to imagine they were built by mere mortals, let alone by people who lived thousands of years before modern industry. We were in the presence of some of the most intricate and precise art I have ever seen made by human hands. The devotion it took to create such beauty and grandeur is hard to fathom. I suspect that when my son walks into our new church here in the US - grand in many of the same ways - that he remembers - as I do - what it was like to walk through some of the greatest temples of this world. 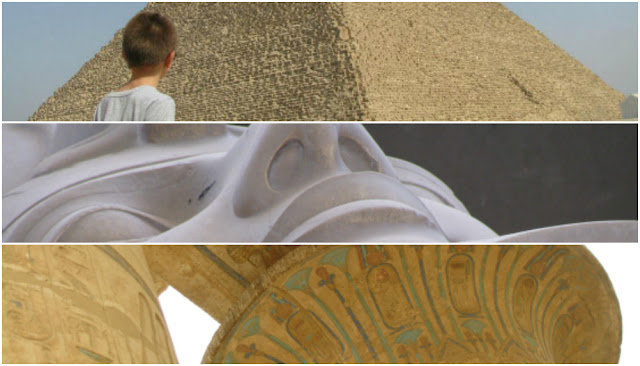 On top of all the remains of ancient Egyptian culture and monuments (literally) are layer upon layer of other ancient cultures that came and went as the greatest powers of the world ebbed and flowed through northern Africa. Layers of Greek tombs and remnants of amphitheaters, ancient cave libraries, Roman baths and roads fill the city of Alexandria. There is no better place to be in order to grasp the cosmopolitan nature of the ancient world. 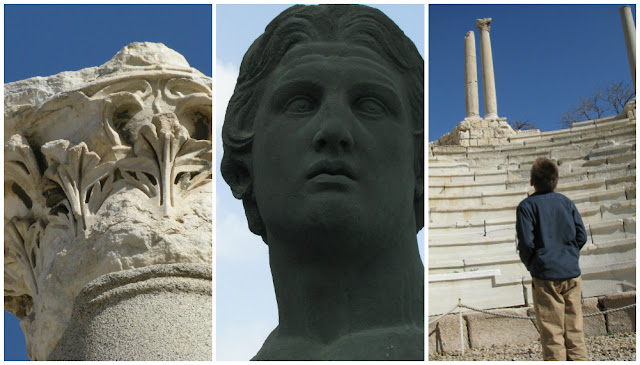 Stepping back in time again and again brought reminders of how much of the Old Testament is rooted in ancient Egypt. Though there weren’t biblical sites in particular to be visited, we walked through mud brick storehouses likely similar to those described in the stories of Joseph as he led the Egyptians through a season of famine. We saw depictions carved in stone of women dancing, tambourine in hand, just as Miriam did after the Israelites made their way through the Red Sea. And as we wonder what it really meant for the people of Israel to be enslaved in Egypt, we could see ancient straw encased in mud brick reminding us of the cruelty of the Egyptian task masters. 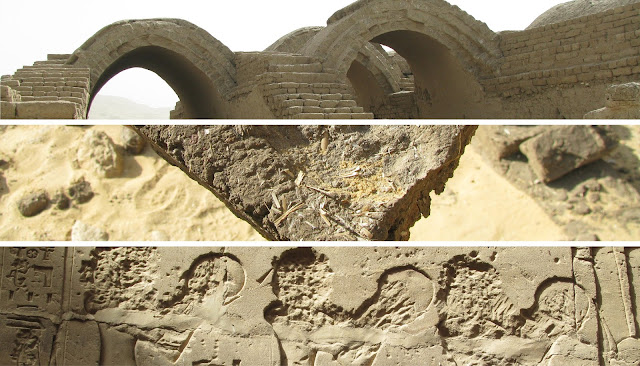 But to my own amazement, our son wound up being most fascinated by the ancient Christian relics and remnants that are also all over the country. At one point in time, Egypt was the most Christian nation in the world, and throughout one can find places where pagan temples were converted into Christian places of worship, or even where Christian temples were built nearby in hopes of calling upon the longstanding sacredness of the place. Hieroglyphs are defaced so that Coptic crosses could sanctify temples. And deep in the desert, one can walk in the footsteps of the earliest Christian monks, whose devotees still live, work and pray in those same places. 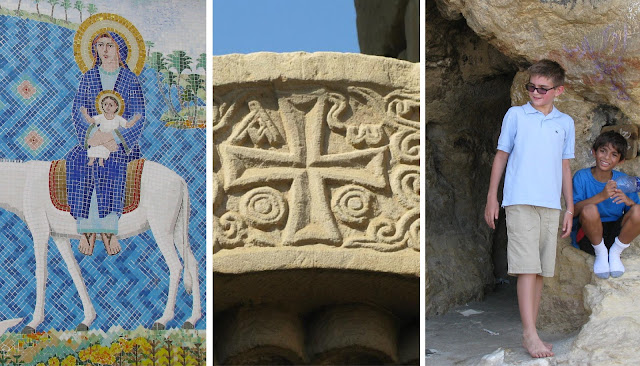 We lived in Egypt in the midst of some of the most pressing events of the modern Middle East, and yet time and again we glimpsed memories and moments of the past. I continue to ponder how our son will will be impacted by those years living in a different place (and will write more about that soon), but I especially hope he will carry with him the memory of stepping into a different time as well.

Images (top to bottom and right to left)

Posted by Rebecca Kirkpatrick at 11:34 AM