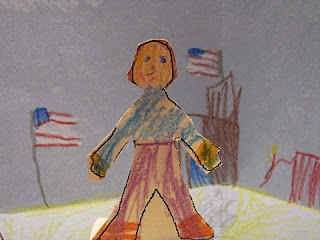 My son came home from first grade on Monday and told me that he had learned a beautiful song in music class that day- “God Bless America.” I agreed with him that it is indeed a beautiful song, and then in the pause before I continued with the conversation, the layers of experiences and beliefs that make these kinds of conversations sticky for me rapidly began to peel away.
This wasn’t any day, but September 12, 2011, the day after the 10 year anniversary of 9/11. Up until the day before we had never really talked to him about what happened that day four years before he was born. Inevitably, with the media coverage (that’s what we get for lingering in bed on a Saturday morning listening to NPR) and the commemorative litany that we used in worship that Sunday, we had just talked about it with him the day before. I shared with him that people who were angry with America flew planes into buildings in New York and that many people died, that it was a very sad day and that we pray for peace in the world. Interestingly, as we talked about it that night he summed it all up for me by saying, “you should never break hope.” I am not exactly sure what he meant by that, but it seemed fairly apt to the situation.
We are attempting to raise him to embrace his identity as a Mennonite, which means that we teach and practice pacifism. For our family, and for other Mennonites, 9/11 brings up all kinds of issues related to war, retaliation and social justice. How do you explain the complexities of these things to a child in the face of such a horrible attack? I am not sure that you do.
Raising him as a Mennonite also means that we tend to bristle at the idea of our son being taught nationalism in school. He has just begun to attend public school for the first time, and it had never crossed my mind that he would do things like say the pledge of allegiance every day. The picture at the top of this post is a diorama that he drew for us of his school, with him standing in front of it. When I asked him why he drew so many American flags (there were more on the other side) he exclaimed, “Because they are everywhere!” While we are by no means anti-American (okay, maybe sometimes we are a little bit) as people of faith, and especially as a Mennonite family, we want our son to understand his first allegiance to be to God not to the nation. Click here for more on a local battle over Mennonites andthe National Anthem at Goshen College.

Most viscerally, as this day marked just the first of what will be a lifetime of conversations with my son on this topic, I reacted as my own childhood self, who lived in a constant state of fear of nuclear war. While this fear no longer keeps me up at night (as a child I used to keep myself awake worried that there would be a bomb dropped while I slept) I can still remember the anxiety I felt over the possibility of war. My son has lived his whole life in a world where the U.S. is at war, and lives in a world where wars are not easily ended by peace treaties, diplomacy and disarmament. I can hardly imagine what he will come to be afraid of as he grows up, but I want to put off that day as long as possible.


It turns out that he learned much more in school that day than I had taught him the day before. He learned that the buildings were called the Twin Towers. He learned that because they were cross country flights that had just taken off, they had a large amount of fuel in them which made the explosions so big. He learned that when they collapsed thousands of people died. He also learned to grieve, as he told me that the thought of the people dying made him cry a little while they were singing in class.


And so I agreed with him, that it is a beautiful song, and we sang it together on the drive home and again at the dinner table that night. That day I decided that I didn’t need to go into all of the above issues with my son. He wouldn’t sit still long enough to hear me out anyway. I chose just to make one comment to him about the lyrics. I told him that as Christians we want God to bless the whole world not just the people who live in America. Frustratingly and innocently he tried to convince me that the song really meant the whole world, not just America. I stood my ground, and I insisted that it did not.

This exchange has led me to the decision to teach him a new song as well which sums up perfectly the kind of Christian and the kind of American I hope he grows up to be.
This is my song, Oh God of all the nations,
A song of Peace for lands afar and mine.
This is my home, the country where my heart is;
Here are my hopes, my dreams, my sacred shrine.
But other hearts in other lands are beating,
With hopes and dreams as true and high as mine.

My country’s skies are bluer than the ocean,
And sunlight beams on cloverleaf and pine.
But other lands have sunlight too and clover,
And skies are everywhere as blue as mine.
Oh hear my song, oh God of all the nations,
A song of Peace for their land and for mine.

May Truth and Freedom come to every nation;
May Peace abound where strife has raged so long;
That each may seek to love and build together,
A world united, righting every wrong;
A world united in its love for freedom,
Proclaiming Peace together in one song.
(sung to the tune of Finlandia)
Posted by Rebecca Kirkpatrick at 10:39 PM