Anabaptists, Infant-baptists, and the Baptism of our Son 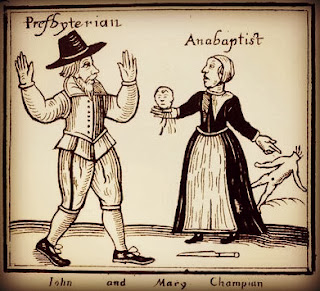 I have written before about what it means to live in an ecumenical and interfaith family, but I stumbled across the following short essay that I wrote before I created this blog and realized that I have never shared here the story of our son’s baptism and the nuances of that decision for not just our nuclear family but our extended families and our church families as well.


A few years ago my husband and I took one of the youth from my congregation out to lunch. She had questions, and we were appropriately deemed experts she could turn to in her struggle as she engaged in a yearlong inquiry into leaving the Presbyterian Church to become an Anabaptist.
My husband and I are experts because, as we like to joke, I am an ethnic Presbyterian and he is an ethnic Mennonite, both of us having decidedly chosen as adults to remain in our respective traditions of origin, each of us serving as pastors in those traditions as well.
We came to this lunch armed with all of the historic and modern conflicts between our traditions, ready to entertain and inform her with a friendly point counter-point.

We talked about the difference between communities of grace and communities of piety; the difference between adult baptism and infant baptism; the difference between holding pacifism up as a standard and resigning oneself to being a pacifist in a non-peace church tradition; the difference between strict standards of ordination and the priesthood of all believers; the difference between a liturgical and a non-liturgical tradition; the difference between a congregational and a Presbyterian polity.
We talked about how though we come from different theological traditions, when it comes to social issues we have more in common with each other than with some of our fellow Mennonites or Presbyterians. She shared her concern about ordination standards within the PC(USA), believing that gays and lesbians should be welcomed into full leadership in the church. We painfully shared with her that, though she may not have encountered this up close within the Brethren church she had been attending, gays and lesbians are entirely excluded from membership within most Anabaptist congregations. We then also talked about what it means to choose to stay in a tradition with which you might have some significant disagreements.
We also talked about the ways that our traditions complement one another. That by prioritizing different moments in the life of the believer, we often come up short of a full understanding of the entire journey of faith. That by elevating liturgical and leadership elements in the Presbyterian Church, we lose the ability for lay people to feel empowered in spiritual leadership; that by minimizing the need for trained and ordained clergy in the Mennonite church, the nuances and consistencies within worship can be lost. We value the way that our traditions hold each other accountable, and that has lead to a relationship of respect, not conflict, in our marriage.
But then I asked her a pivotal question that turned this civil and enlightening luncheon into a 16th century smack down. “They are not telling you that you need to be rebaptized, are they?” She indicated that they were not insistent, but had offered it as an option, if she chose to join. I was so livid I started quoting lessons from this poor child’s confirmation class, reminding her that there was no need to be rebaptized since God was the primary actor in her baptism, and I was pretty sure God did not need a do-over. I reminded her that she had already confirmed her infant baptism, and to be rebaptized would mark her confirmation as invalid as well. I would be so proud of her to have made an informed and prayerful decision to join a different faith tradition as an adult, I told her, but please, please do not get rebaptized.
It was at this point that my husband had to chuckle and reminded us that this was the exact agreement we had struck when our now nine year old son was born – that we would baptize him in the Presbyterian Church, allowing him to experience and develop his faith fully immersed in the sacraments, while also teaching him the traditions of the Anabaptist tradition, knowing that some day he might choose as an adult to be rebaptized as a Mennonite.
It is important for me to point out two things. First, I must acknowledge that our son may grow up to choose neither to be Presbyterian or Mennonite; he may choose to not even be Christian, or to not practice any faith whatsoever. Second, I should also sheepishly acknowledge that this was probably the exact heretical pact that my ordination committee was concerned I would fall into when they scrutinized my baptismal theology after learning of my engagement outside of the church.


It is also helpful to remember that the name Anabaptist, the identity claimed by the Mennonites, Brethren and Amish, means precisely “rebaptizer.” It was this act of rebaptizing adults in the community, while simultaneously refusing the practice of infant baptism for their own children, that shaped them into a tradition colored by persecution and martyrdom.
For my husband’s family, this remembrance of the historical trials of their tradition is an important part of their identity as Mennonites, and to see this next generation being returned to the very practice against which his own ancestors died protesting made for a slightly elevated air of tension in the family. In an attempt to alleviate the tension and in good humor, my mother-in-law gave me a photocopy of a reformation-era woodcut illustration of a Mennonite wife and Reformed husband showing the wife holding the severed head of their child, killed by her own hands to avoid the dreaded pedo-baptism. I have included it above.
Fortunately, it was also around this time that the World Alliance of Reformed Churches and the Mennonite World Conference engaged in a time of reconciliation, with the WARC admitting to the atrocities perpetrated by the church against the Anabaptists. In the spirit of a new era of cooperation, we all came to terms both with our son’s baptism and with the possibility for rebaptism by his own choosing at a later…much later...moment in time.
The day of our son’s baptism was one of great celebration. The small congregation where my husband was pastoring cancelled their worship service for the morning and blended in among 250 Presbyterians to witness to our son’s baptism and to join in committing themselves to raising him within the Christian faith.
Both Presbyterians and Mennonites joined us in a class after worship that morning where we talked about the differences in our traditions and the ways that my husband and I live together within these two traditions. Most of the Presbyterians had no understanding of the historical persecution of Anabaptists, and I believe it was helpful for the Mennonites to hear the seriousness with which Presbyterians take their responsibility in the baptism of children in the church community. One of the most striking and poignant moments of that day came when the Mennonites shared that they did not need to have the traditional service of child dedication for our son in the Mennonite church. What we had done together that day was sufficient.
The question is, will it be sufficient if he decides to live his adult life as a Mennonite? Will it be sufficient enough that he does not feel he needs to to be rebaptized? I have no idea.
We are still trying to figure out how you actually go about authentically raising a child in two Christian traditions that, while they have some significant differences in our eyes, seem very similar in the eyes of a child.
We have already started talking to him about why his decidedly Mennonite grandparents are affiliate members of a Presbyterian Church in the community to which they have retired. Further down the road we will also share with him that his Presbyterian grandparents are faithful participants in a para-church organization that supports closeted gay and lesbian Mennonites and their families.
Whether he identifies himself as a Mennonite or a Presbyterian, and whether or not he chooses to be rebaptized, I hope that he learns to articulate the nuances of his faith, to value how we live out our faith as a family, and to find ways to both complement and challenge whatever faith he chooses.
Posted by Rebecca Kirkpatrick at 1:23 AM