Mountain Top Experiences: We Get to Carry Each Other 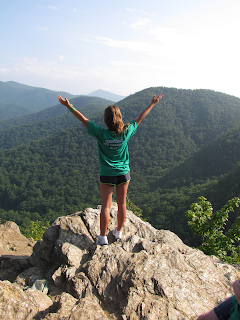 Last week I spent my time with 13 teenagers from my congregation at a youth conference for young people in our denomination in Montreat, North Carolina. I had planned to write an entire entry on how being banished to the boys house up the mountain had actually given me some monumental insights on how I am raising my own son, and what he might be like himself as a teenager. It is a unique gift to be able to work with other people's children, and I treasure the things that they teach me about being a parent.

BUT...we had an actual mountain top experience, so I thought that this might be more important of all the things I could share from my week. First, let me say that one of the blessings of my life is that the young men and women that I get to work with in our youth group were just little children when I first met them. The kids who went on this trip together range in age from 14 to 18, which means that when I first met them and became their pastor some of them were still in preschool.


We climbed Lookout Mountain on Thursday morning of our trip and were all a little taken aback by the steepness of the hill and the beauty of the landscape all around us. I appreciated so much their enthusiasm for taking on such a physically challenging feat and was especially impressed with those who, though they struggled up the mountain, were determined to get to the top.


We had a very meaningful time at the top of the mountain – literally and spiritually we all had a mountaintop experience. They talk about Montreat being a “thin place” where heaven and earth meet.  We had some pretty frank conversations. I talked about what it means for them to take their responsibilities to the community and to each other seriously, and they talked about how they want to start taking turns preaching in front of our congregation. I am certain that God was with us on that mountain.


It was not until we were ready to head down the mountain that the trouble started. During the entire journey, I kept asking the boys to be more careful and mindful of their energetic means of getting up and down the mountain, reminding them that they were the strongest and needed to stay healthy so they could help get the rest of us down the mountain if something were to happen. (Case in point of how they are preparing me to be the mother of a teenage boy.)


Wouldn’t you know, about half way down the mountain one of the girls twisted her ankle and though she tried to continue on her own,  three of the boys were called upon to carry her tiny frame down the mountain on their backs. While they had to switch off frequently, this was a perfect example of how in a community the stronger help the weaker and by doing so we are all built up as the body of Christ.


We all kept moving down the mountain (much faster than we had climbed,) and it was when we were almost at the bottom that the word was passed up that another girl had twisted her ankle as well, but by the time I got to the trail head she was at the car and they told me that it was pretty close to the bottom when she had gotten hurt. A couple of hours, two doses of Advil, some elevation and ice packs later both girls were on their way to recovery.


The next morning I agreed to climb the mountain one more time, earlier in the day, so that we could watch the sunrise over the mountains. I met up with two of the older girls at 5:45 a.m. and the three of us took off -  coffee, water, and granola bars in hand. It was again a beautiful moment on the top of the mountain, and I am so glad that I took the second trip up with them that morning, but the most profound moment for me happened towards the bottom.


As we started our walk over high steps and gnarled roots Sarah pointed out to me the difficult spots where she had carried the second hurt girl down the mountain.  Now one of the most physically obvious things about Sarah is that she is very little. (My son once asked her if she was a regular size person.) Despite her size she is incredibly strong and starts for her high school rugby team. Just this year Sarah  actually had knee surgery from a rugby accident and wore a brace for a good portion of this spring.

The members of the body that seem to be weaker are indispensable,  and those members of the body that we think less honorable we clothe with greater honor, and our less respectable members are treated with greater respect;  whereas our more respectable members do not need this. But God has so arranged the body, giving the greater honor to the inferior member, that there may be no dissension within the body, but the members may have the same care for one another. If one member suffers, all suffer together with it; if one member is honored, all rejoice together with it. 1 Corinthians 12:22-26 .

I was reminded that it is not always clear who are the weak and who are the strong, who are the greater members and who are the lesser. This spring when Sarah had just hurt herself, we went on a Senior High retreat and all of the youth helped her get what she needed and to make her comfortable. In that moment Sarah was the one in need of being carried. On that mountain it was the two girls with twisted ankles. Someday it will be the strong and energetic boys in our group.


That Thursday morning when we first climbed the mountain, we were gone so long that we missed the morning Keynote Address for the conference. The theme for the day was community – we may have missed the talk but we all learned the lesson.

This is what it means to be the Body of Christ, and I am so thankful that I had the chance to witness their care for each other, and to know that though they may not be able to name all of the books of the Bible, that they may grumble when it comes time to volunteer to lead the group in prayer, that their enthusiasms are more frequently for earthly than heavenly things, when the moment calls for it, they know how to live out the Gospel.
Posted by Rebecca Kirkpatrick at 4:36 PM