How Can I Keep From Singing: Five Hymns from "Glory to God" to Use with Children 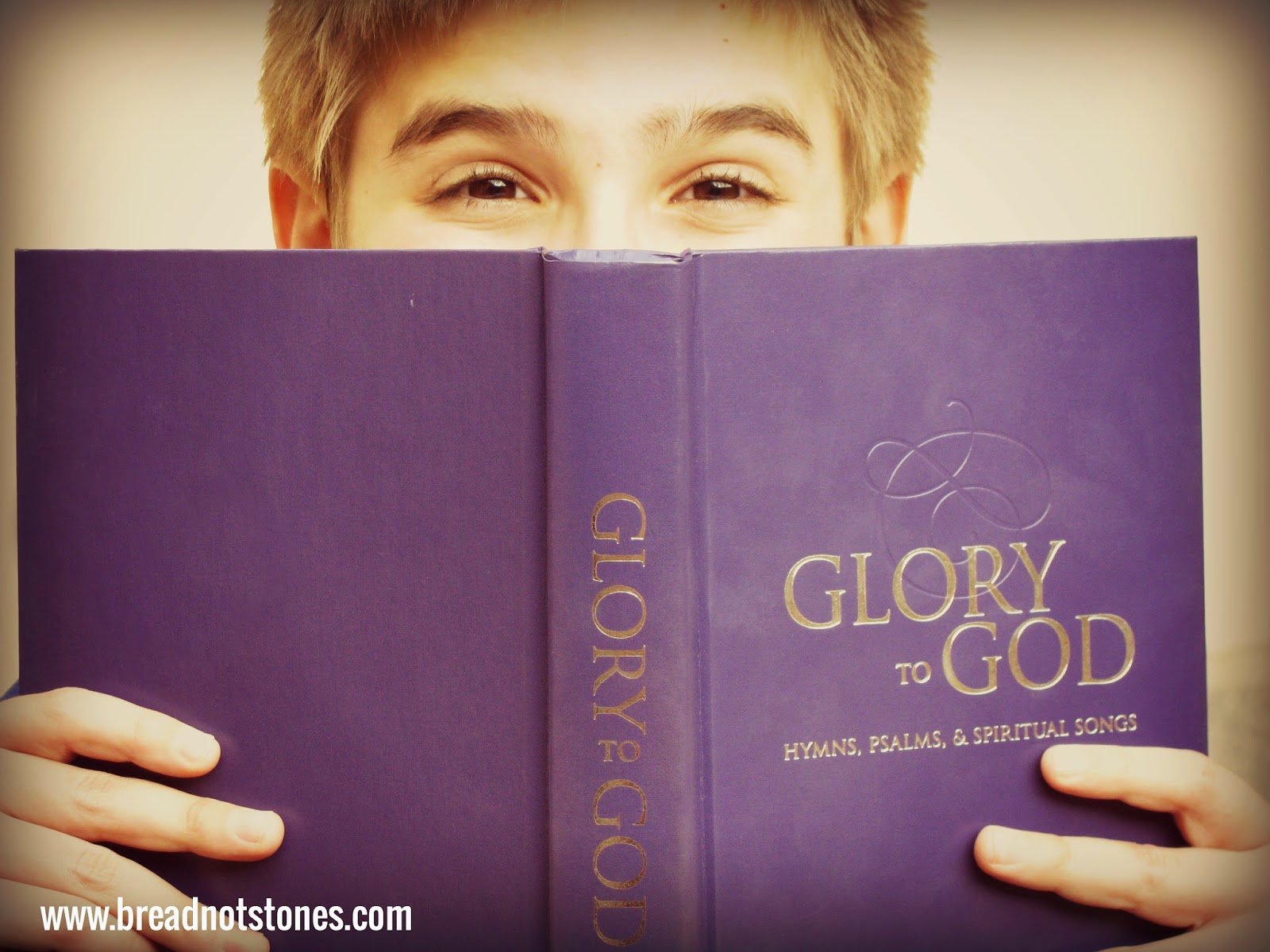 When I was a young child, I was part of a very small choir at our church called the Seraph choir. Four little girls with older siblings who were a part of the regular children and youth choir. Both choirs met on Saturday mornings (those were the days), and we would learn new music and generally work on our music skills.

At one point our choir director (the assistant organist at our church) told us that she noticed on Sunday mornings, as she processed into the sanctuary with the choir, that we (us four little girls) were not singing along with the congregational hymns.

To encourage us to sing with the congregation, she started teaching us every Saturday morning the hymns that we would sing the next morning in worship. I am pretty sure that this one simple addition to our very simple children’s choir experience deeply affected my life. It developed my love not just for hymns but for congregational singing. It exposed me to some of the classic melodies of the Christian tradition as well as some of the most essential theological vocabulary of the faith. All starting at 6 years old.

We didn’t just sing the Sunday hymns, though; we also learned simple anthems and other fun pieces of music (including my favorite, the Chattanooga Choo Choo). One piece was Natalie Sleeth’s “God of Great and God of Small,” a beautiful description of the vastness and yet the attentiveness of God. Years later I still remember all of the words:

God of great and God of small, God of one and God of all, God of weak and God of strong, God to whom all things belong…God of silence God of sound, God in whom the lost are found, God of day and darkest night, God whose love turns wrong to right.

Just as much as any Sunday school lesson, this piece of music gave me language to describe the paradoxical nature of a God both all-powerful and all-loving. I loved and remembered this anthem so well that I used it a few times when I was serving in my congregation and we needed a simple but significant piece of music for young voices in worship.

Flash forward now over 30 years, and the Presbyterian Church (USA) has recently published a new hymnal for our congregations - Glory to God.

While I was anxious about letting the old “blue” hymnal go, I was pleasantly (and honestly deeply) surprised to see that the committee, who spent years working to assemble this hymnal, had chosen the hymn setting of “God of Great, God of Small” to be included in the volume (it is #19).

Hymnals are wonderful resources to use with children. Now that this particular song is readily available to pastors and teachers, it can be used even more widely to help children understand the nature of God. It was only on my second and third times through the new hymnal that I realized that several of the newly included hymns and songs in Glory to God are perfect for use not just in the sanctuary, but with children in the classroom and music rehearsal room.

Here are four more of my favorites:

#462 I Love to Tell the Story: This is an oldie but goodie that could be found in the old red Presbyterian hymnal, but was not included in the now old blue Presbyterian hymnal.  But in the church where I grew up, they used the blue hymnal in the sanctuary and the red hymnal in the chapel, where we had Easter Sunrise services and other special events throughout the year. I don’t know why exactly, but I loved this song as a child. Maybe it was the catchy melody, maybe the chorus, maybe the earnestness of the lyrics.

Glory to God includes several hymns like this - oldies that many folks were sad to see not included in the blue hymnal. There are not too many hymns generally about evangelism, and when I was a child I didn’t really understand that this is what the hymn describes.

What I did understand was that when I sang it I was one of the people telling this Jesus story, and it seemed like a lot of people needed to hear it. What I absolutely love now as an adult is the third verse:

I love to tell the story, for those who know it best seem hungering and thirsting, to hear it like the rest. And when in scenes of glory, I sing the new, new song, ’twill be the old, old story that I have loved so long.

I loved singing this in the chapel next to old women who had probably been singing this song and telling this story their whole lives, and now were really starting to think about what song they would be singing in their next life.

#205 Ubi Caritas (Live in Charity): Glory to God includes several pieces from the ecumenical monastic community of Taize, located in the French countryside. The Taize community developed a specific worship style many years ago that consists mostly of repetitive sung prayers and song. Ubi Caritas is one of the most well known of the pieces that they have written.

Truth be told, some people love Taize worship and some people really don’t get much out of it, but almost all of the children that I have experienced Taize worship with typically find it more engaging than traditional worship. Unlike traditional hymns, Taize pieces are usually just two lines long, which makes them very easy to pick up. Obviously, then, repeating them several times makes it even easier for children to be able to fully participate in the congregational singing. By the third time through, the children’s voices are just as strong as the adults.

But Taize pieces can also be used as prayers in the classroom. What better way to end a class than to sing through this simple piece together with children:

Isn’t this a great benediction for our children as we send them out into the world each week?

#851 Come Bring Your Burdens to God: Another category of music that was both included in the previous blue hymnal and in Glory to God is what I might describe as world music. I am not sure when I first learned this South African chorus, but a few years ago I started including it in our Wednesday evening contemplative worship during Lent.

Something about this song really stuck with my son. He loved the idea of separate chorus and leader parts. We would find ourselves singing it all of the time: in the car, getting ready for school, at bedtime. One night after singing it over and over again together in his bed, I asked him what he thought the song meant by “Jesus will never say no.” Is that true? Didn’t Jesus say no all of the time? Does it mean that Jesus will never say he has no time for us? It was a fascinating conversation.

Again, this is a short song with simple lyrics that would be great to warm up a children’s choir, giving children turns at the leader part.

Here is just a hint of how into this song my son is:

#340 This Is My Song: I actually wrote about this “national” hymn a couple of years ago when I was reflecting on how to talk to my then 7 year old son about September 11th.

This is my song, O God of all the nations, a song of peace for lands afar and mine. This is my home, the country where my heart is; here are my homes, my dreams, my sacred shrine; but other hearts in other lands are beating with hopes and dreams as true and high as mine.

Ever since I was a teenager I have struggled with singing national songs in worship. Now married to a Mennonite, I am even more conflicted. I love that Glory to God includes this song that feels so much like the rousing anthems that we sing on national holidays, but that speaks a hope and truth that we all know we should be teaching our children to value in an increasingly shrinking world.

While I was always a fan of including this hymn in worship on national holidays to supplement other hymns that might give the impression that we believed that God favors our nation over another, this new hymn can also be used as a beautiful poem and prayer in the classroom any time you are talking or teaching about children and cultures from around the world.

My only complaint in this hymn is the third verse, which was not written by the original writer. This is very typical for older hymns, and I am by no means a purist. But I want to offer here, for use in the classroom, an alternative third verse (which is sometimes included in the hymn) that continues the theme of peace and unity more than the current third verse does:

May truth and freedom come to every nation; may peace abound where strife has raged so long; that each may seek to love and build together, a world united, righting every wrong; a world united in its love for freedom, proclaiming peace together in one song.

These are just a few of the new hymns in Glory to God that I am excited to be singing regularly in worship. Most importantly, now that these hymns are included in this ubiquitous resource, they are easily integrated in the whole life of our children’s church experience.

Since many of you have probably been using Glory to God for several months now, which hymns have you started using with children in your congregation?
...And because I can’t help myself, here is my list of honorable mentions: #100 Canticle of the Turning; #377 I Want to Walk as a Child of the Light; #488 I Was There to Hear Your Borning Cry; #773 Heaven Shall Not Wait; & #821 My Life Flows On.