I am reposting this reflection from 2012 on how we talk about the death of Christ with our children. As we move through this Holy Week, may it serve as an encouragement for all of us who will sit in a pew next to a child this Friday. 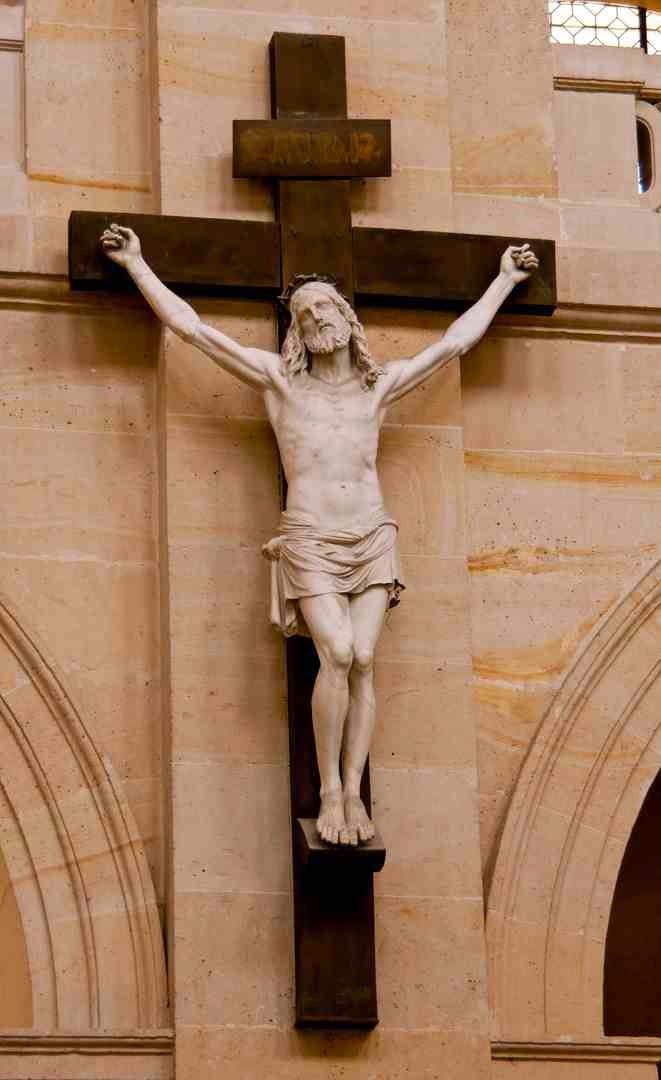 I can’t tell you how many times I have been forwarded the following joke:

Jesus’ death on the cross, while probably part of our children’s religious consciousness (unlike little Timmy’s), is actually pretty disconnected from their experiences in the world. If we consider Jesus’ crucifixion to be at its most historic an act of capital punishment, it almost seems strange that we give our children multiple books, including the Bible, that in one way or another recount his death. Looking through the “religious” section on my son’s book shelves, I easily found at least five picture books that depicted Jesus’ crucifixion.
Why Jesus died is a very reasonable question for children to ask, and one that I have found they especially like to save to ask their parents in some of the most intimate of moments.
I know that when my son first asked me why Jesus died, I answered very simply, telling him that he died because he loves us. That seemed like a pretty reasonable answer, but one that I knew would not be enough forever.
My son is now eight years old, and it has been a few years since he first asked me about Jesus’ death. I asked him this evening if he could tell me why Jesus died. He told me that Jesus died because people thought he was lying about God. People didn’t like the things he was saying, and they thought he was lying about being God’s son.
I asked him what it means to us that Jesus died on the cross, and he told me that it means that Jesus saved us. Then he turned and looked at me and said - how? Saved us from what?
This is when the questions are not so easily answered. My son’s simple question, “How” has been answered in so many different ways over so many hundreds of years that it overwhelms even me to think about the very best way to try to describe it to him. So instead I sent him to bed so I could collect my thoughts.
I could tell him that because of our sinfulness as human beings, we needed someone like Jesus to come and atone for our sins. But what does an eight year old really know of sin?
I could tell him that as human beings we are separated from God and need a way to bridge that gap and reconcile us to God. But as a child he feels very much connected to God. Do I really tell him that in fact there is a chasm of separation between him and God no matter how close God might feel to him?
I could tell him that as sinful human beings God was obligated to punish us, but that Jesus took our place and took our punishment on our behalf (the punishment that scared little Timmy into math submission). But how does that connect to a God that we have described to him as loving and forgiving?
I could tell him that Jesus came as a mighty warrior to defeat the powers of evil in the world, and through his death waged a cosmic battle with the devil. But how is that connected to the Jesus of peace, love and nonviolence that we have taught him about so far?
I will admit to wrestling myself with how I understand Jesus’ death as it is related to my own faith. I bristle at the idea that God would demand a blood sacrifice in order to be willing to forgive our sins. I sympathize with those who experience the death of Jesus as divine child abuse. I contemplate the sovereignty of a God who could not act to save the life of his own son.
I have found comfort personally in words found in my own Presbyterian tradition that speak to our Christian faith as a whole and to the limits of our human understanding of Jesus’ reconciling work on the cross. The Confession of 1967, a statement of faith written at a moment when our world seemed to be at a peak of dysfunction and disconnection, gives me words to describe the indescribable:
God’s reconciling act in Jesus Christ is a mystery which the Scriptures describe in various ways. It is called the sacrifice of a lamb, a shepherd’s life given for his sheep, atonement by a priest; again it is ransom of a slave, payment of debt, vicarious satisfaction of a legal penalty, and victory over the powers of evil. These are expressions of a truth which remains beyond the reach of all theory in the depths of God’s love for man. They reveal the gravity, cost, and sure achievement of God’s reconciling work.
In reflecting more on these words today, I think that I have come to a better understanding of  how I will describe the “how” and the “why” and the “from what” questions that my son has about Jesus’ death and our salvation - the image of a shepherd’s life give for his sheep.


In the morning I will explain to him that the world is full of pain, of people treating each other badly, of people disappointing each other and disappointing God. Unfortunately, I think he will probably be able to understand this all too well.
But then I will tell him that Jesus came to teach us how to act better, how to treat each other better, how to love God better, how to be better. And to help us do that, he has stood between us and the world. He has stood up to the wolves that have come to threaten his flock. As God’s own son…as God on earth…he has shown us what we are to do for those that we love. We give our lives for them. We take the hit. We bear the burden.
So I guess my answer for him has not changed all that much from when he was in preschool. Jesus died because he loves us.
Even though I came back to the same answer, I believe there is value in the wrestling with what all of this means to me. Some day he will not simply take my word for it, but will want to seriously wrestle with this himself, and I want to be part of those conversations as well.
I am looking forward to the insights and the questions that he will bring to this life-long conversation when he is a precocious 13 year old, a rebellious 18 year old, an idealistic 23 year old, and eventually a parent himself. I want to hear how he will answer his own child someday. It is just a guess, but I am pretty sure love, and not punishment, will be at the heart of his answer.
Posted by Rebecca Kirkpatrick at 2:13 AM