The World Religions: 5 (out of 100) Things Your Child Should Know Before Confirmation Class

I have written a few times before about being part of a family that is “inter-religious.” You can find these posts here, here, and here. Obviously, we are motivated to talk in our home about what it means to be a part of a religion that is not Christian.

Of all the conversations that we have together with our son, these are the ones that seem to repeat most often. For example, no matter how many times we explain what it means to be Jewish, he will ask the same question again a month or so later.

Interestingly, he hardly ever asks about being a Buddhist. He only knows one, and I think he just trusts that his uncle knows what he is doing, so he doesn’t worry about it.

When I work with students in a middle school, high school or Confirmation class, I instinctively want to teach them to respect and even appreciate other faith traditions. And yet, most youth these days have a decidedly post-modern perspective on the world, which means that they are already comfortable with differences and differences of opinion. They don’t usually need me to teach them respect...they need to hear from me why is I have chosen and why they may choose to be a Christian in the midst of a diverse religious landscape.

When my son asks again and again about what it means to be a different religion, I choose to believe that he is not so much interested in whatever religion he is asking about that day as he is in understanding why we have chosen ours.

I only ever touch briefly on world religions in Confirmation class, but have had some wonderful and in depth conversations with high school students using this curriculum which I really enjoy from Faith Alive Resources.

In Confirmation, students just need to be aware of the most basic elements of the major world religions, so that they can easily make comparisons between the experiences they have in their practice of Christianity and the particulars of other religions.

In Confirmation class we actually spend a significant chunk of time on the history of Christianity and how it has developed over the past 2,000 years. When students come with a larger sense of the Christian story, it is then possible to talk about the way that the Church has been involved in the development of western civilization, the mistakes that we have made as the Church, and the way that we as Christians live in a religiously plural world today.

97. Islam
I started teaching my first Confirmation class in the fall of 2002, right around the first anniversary of September 11th. Of all the world religions, this is the one that needs the most correction or explanation for students. Frequently they come to class with misperceptions or even just false information that they have gleaned from a variety of sources. So while there is a lot that I hope students don’t come knowing (or thinking they know) about Islam, here are the things that they should know. They should know that Islam is a monotheistic religion, founded by the prophet Mohamed. They should know that Muslims trace their ancestral heritage to Abraham and that their scripture is the Koran. They should also know that while Islam started in the Middle East, there are Muslims living all over the world.

In Confirmation class when we move through the stories of Genesis and the patriarchs (and matriarchs) we can pause for a time to talk about the stories of Hagar and Ishmael. These stories are rarely included in the rotation of Bible stories that we teach to children, and so in Confirmation we can broaden the story and help students better understand the connections between Judaism, Christianity and Islam. In Confirmation class we also talk a lot about the significance of scripture in our life of faith. Talking about the ways that Muslims respect and care for the Koran can provide some helpful perspective on how we treat our physical Bible.

98. Judaism
For many years part of our Confirmation class included a visit to a local synagogue for Friday evening worship. It was always a helpful experience. Judaism is one of the hardest of the world religions for students to wrap their heads around, I believe, because it is so closely connected to our heritage as Christians -with one significant difference. Before they step into Confirmation class students need to understand that Christians and Jews share the tradition of the Old Testament...that the primary characters of the Old Testament would all be considered Jewish (though this is an oversimplification of the development of the history of Israel and the faith of the Israelites)...and most importantly that Jesus and his disciples were Jewish.

In Confirmation class we spend a significant amount of time in the Old Testament talking about themes of covenant, exile, liberation, promise, redemption, atonement and messianic hope. All of these theological elements are our inheritance from the Jewish tradition. In Confirmation class we try to put the stories of the New Testament in the context of the first century Jewish community who would have heard Jesus’ parables, his sermons, and his interpretation of the law all with the Old Testament in mind. In class we can also touch on the ways that the Christian church has significantly persecuted the Jewish community over the past two thousand years. What does it mean to be inheritors of that history as well?

99. Buddhism
My brother would be the first to tell you that much of what you think is Buddhist is not - most significantly, the rash of mindfulness-oriented movements that litter the religion table at your favorite big box bookstore. The most vital things that students should understand before they come to Confirmation class are very simple. Buddhism is the only one of the five major world religions that does not orient their worship towards a divine being. More simply put, Buddhists do not worship any god. Probably they will come knowing that there is a Buddha, but it is unlikely that they will really understand what it means to be a Buddha.  They should understand that Buddhism developed in Asia and while it is still significant in that part of the world, there are Buddhists living around the globe. Since on most days I myself can’t remember the eightfold path or the four noble truths, I think that it would be a stretch to think that they would as well.

In Confirmation class, when everything is going just right, we can find the time to talk about evil and suffering in the world. We can ask questions about why a good God would let such bad things happen. As part of these conversations we can confront the misperception that being a Christian is an insurance policy on a charmed life. We can confront the prosperity gospel that tries to convince us that if God blesses us then we will have personal and professional success. This can be the perfect opportunity to talk about the Buddhist concepts of life and suffering - in that all life is suffering and they follow the teachings of the Buddha to do what they can to alleviate the suffering in their lives and in the lives of all other living beings. What would it mean if that were our chief aim as Christians - in everything we do to seek to alleviate suffering? Would we live our Christian lives differently? How many times in his life and miracles did Jesus seek to alleviate the sufferings of others? A lot.

100. Hinduism
Hinduism may be even harder to quantify for children and youth, but here are some of the basics that they should be able to grasp - Hinduism is the ancient religion of India and the root tradition of Buddhism. Hinduism is not a monotheistic religion. A variety of different traditions and gods make up a pantheon of possibilities when it comes to how one practices Hinduism. Hinduism is also where we find the origin of the concept of reincarnation.

In Confirmation we obviously talk about what it means to be a monotheistic religion. For the first time, though, students may be introduced to the fact that the earliest believers of the Old Testament didn’t exactly believe that the God of Abraham and Moses was the only god that existed. Rather, they believed that theirs was the only God they should worship. This is a significant difference in how we understand what it means to worship one God alone. When we talk about worshiping the same God as a Jew or a Muslim we know that though we have different experiences of the same God, it is still the same God, and we believe the only God. When we as Christians relate to Hindus, we have to consider what it means for a faith to believe in an entirely different set of gods than we do. Does that change our willingness to learn from that tradition?

I think it also bears mentioning that the theological concept of reincarnation is very much a part of our popular culture. It would not surprise me at all to hear a group of students talking about “who they want to be/what they want to do in their next life.” Without being an alarmist or a party-pooper, I think it is important to name for Confirmation students that we don’t believe in reincarnation, but rather resurrection. Not that resurrection is a simple concept to grasp...but that is a whole other conversation.

~
The final question for this specific set of concepts or themes, which is technically the final five items in this list of 100, is how do we actually teach our children the basics of the five world religions? Even I struggle to know the best way to represent a tradition that is not my own. Fortunately there are several books out there for children that do just this. I am listing several of them below which I have found helpful and know you will as well.

Of course as we have also experienced in our family, children learn even more from personal connections than they can from reading a book, so don't hesitate to nurture these diverse relationships in your family and community. It will make for great conversations. 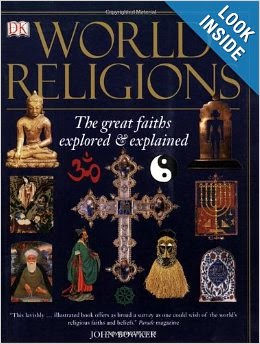 How to Be a Perfect Stranger: A Guide to Etiquette in Other People's Religious Ceremonies

Posted by Rebecca Kirkpatrick at 4:08 AM