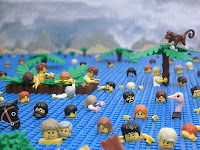 I will admit to being torn when it comes to the story of Noah and the Flood. On the one hand I am visually captivated by the many artistic interpretations of this story filled with an endless menagerie and the brilliance of the rainbow. It is also hard not to enjoy all of the many apocryphal retellings of the story - for example,  Shel Silverstein's Unicorn Poem.

But on the other hand, Noah's is a story of human depravity and the destruction of the world by God via natural disaster. Outside of the animals, and maybe a "white-washed" explanation of the sign of the rainbow as a promise of God's love, there is really nothing in this story that is G rated.

Here is a PG-13 paraphrase of the story as found in Genesis 6-9. By chapter six God is already sensing that this humanity project is not going to last forever - when He looks down upon the earth and sees the violence, wickedness and corruption, He is sorry that He ever made men and women. He is grieved in his heart. In addition to the sin there is also a passing reference to mysterious figures called the Nephilim (probably divine beings of sorts) who have begun mating with human women. It is not clear if this is part of the corruption of humanity or just a sign of the times.


God decides to wipe out the inhabitants of the earth. Noah, being the only blameless man on earth, is chosen along with his three sons and their wives to build a very specifically designed boat to preserve animals to repopulate the earth after the flood. Here it gets a little confusing, because there seem to be conflicting sets of instructions about how many animals to take onto the ark: sometimes it's a pair, and sometimes it's seven pairs. In any case, they board the ark and the rains begin, and the breath of life is removed from all the earth.

It rains for 40 days and nights. After the rain Noah waits several days, and eventually weeks, sending out a series of birds to seek out signs of vegetation. Once God calls Noah and his family out of the ark onto the dry land, Noah performs a ritual sacrifice of some of the birds that he has preserved, and the smell of the sacrifice is pleasing to God.

God makes a new covenant with Noah and sets the sign of the rainbow in the sky to be a reminder to GOD that he has promised never again destroy the whole earth BY A FLOOD.

If you continue on in Genesis, you will find an additional story of Noah and his sons, in which Noah plants a vineyard and one fateful day his sons come upon him drunk in the fields - naked.

This story is full of potential questions and anxieties for both children and adults.

First, both children and adults can get caught up in questions of scale. Was Noah really 600 years old, as the Bible describes? How could Noah actually collect every animal on earth, and how would they all fit in a boat together? How were the predators kept from eating their fellow passengers? I once coordinated a table-led adult Bible study on this passage at my church, and one table actually spent 30 minutes talking about the smell and all of the poop. All of these questions miss the point of the story. They are all unanswerable, and when my son or a child in my congregation, or even an adult, asks them of me, I respond with a very confident "I have no idea."

Second, questions can come up about what it means that God has chosen to destroy the earth and human beings because of their bad behavior. One need only watch reality T.V. or listen to the evening news to begin to wonder how much worse the world could possibly have been in Noah's day. And God was ready to give up on them? Interestingly, none of the variety of children's Bibles I use avoids this part of the story. Obviously to gloss over the problems of humanity would make the rest of God's behavior seem pointless. The tamest description that I came across was that the people were being nasty to each other and God wanted to get rid of the nastiness - certainly a description children can relate to.

Third, questions arise when we actually experience devastating floods in our modern context. It is logical for both children and adults to ask why God allows floods to kill so many people. Wasn't the rainbow a sign that this disaster would never come again? More on that below.

Finally, and this is the question that my very pragmatic yet curious son likes to ask, did this actually happen? He asks this question a lot, so I give him a variety of answers depending on how much time we have for the conversation. The very first time he asked me was after he was taught the story in Sunday school probably at the age of 4. He retold me the story and ended it with, "but this happened a very long time ago." Who knows if this was what his teacher told him to alleviate any anxiety, or if he was saying it to alleviate his own anxiety. I personally find that tag line as helpful as when my dad tried to make me feel better about the earth gradually falling into the sun by reassuring me that we would both be long dead when it happens. Thanks, Dad. I quickly provided some alternative language for my son, telling him, "People told this story a long time ago to help them talk about God."

On other occasions, I have talked with him about how a story doesn't need to be literally true for it to have an important truth in it. For example, from this story we take the truth that our actions affect God, and that God doesn't just smite or not smite us, but rather has complex emotions when it comes to life on earth. This story also tells us that God has chosen, despite our tendency to make mistakes, to be in relationship with us; that God makes promises to us and that God keeps those promises.

Sometimes my son likes to argue with me about this, claiming that he believes that it actually happened, even if I don't. Once he asked me if there was anyone else in the world who also believes what he believes, and I told him that there are other people who believe the flood and the ark actually happened. As he talked more about it, he made the point that God has the power to do this very kind of thing. I affirmed his understanding of God's power, and went even further to tell him that there is nothing God can't do. I then tried to explain to him that I believe that just because God CAN do something doesn't mean that God does - AND that God works in the world for good.

It is impossible to resolve all of our modern issues surrounding this ancient story, but since we live in a society in which Noah's Ark is pretty much the only Old Testament story that still has widespread cultural currency, the hope that we can wait until they are older to teach this story to our children is a faint hope at best. 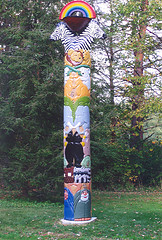 I think that for older children it may be helpful to talk about how this story was told a long time ago before they understood the science that goes into the natural world, and we don't read the Bible to explain science. Even thousands of years ago people asked the same kind of questions about why these things happened, and the story of Noah is one way that they tried to understand this kind of tragedy. This is what we hold in common with our ancient ancestors in faith - we want to understand how God interacts with the world.

These are the things we continue to affirm:
I can't close without mentioning the rainbow as well. Why, we might ask, would God need a reminder? I don't know. My guess is that God doesn't actually need this reminder, but we do. Just as we declare our faith again and again in God to reaffirm to ourselves and our community of faith what it is we believe, so the rainbow is God's declaration of grace, repeated again and again for all of creation to witness to the truth that God believes in us.

Posted by Rebecca Kirkpatrick at 1:06 PM